A sky exposure plane is an imagined inclined plane which the height of a building is not allowed to pass through. Its purpose is to provide light and air at street level in medium to high-density (R6-10) districts. These planes have led to the stepped character of high-rise buildings throughout Manhattan, and are part of a broader set of codes called setback regulations, which require developers to push buildings away from the street as they grow in height. (nyc.gov)

Sky exposure planes can vary in slope depending on the width of the streets below, the height of the building, and the particular zone in which the building sits. In most commercial and residential zones, the initial setback distance on a narrow street (with a width of 75ft or less) is 20 feet, and 15 feet on a wide street (greater than 75ft). In other words, buildings on wider streets have steeper slopes.

These slopes are expressed as a ratio of vertical distance to horizontal distance, and can be visualized in this graphic from the NYC Zoning Resolution, Article III, Chapter 3, Section 33-431: 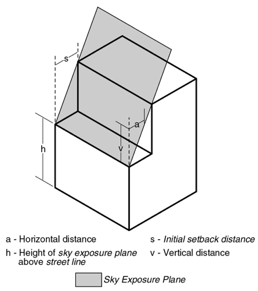 Different zones have different height regulations, so the height of the sky exposure plane above the street line will vary depending on the density of the zone. Typically, the initial setback in medium density districts (R6-R7) will begin at height of 60 feet, while in high-density (R8-R10) districts the initial setback will begin at 85 feet. (NYC Zoning Resolution, 2016)